This post may contain affiliate links. Please read my disclaimer for more info.

Bad CTR? Headline Studio By CoSchedule Has The Right Cure

In this post, I’m going to walk you through the process I use to write great headlines, and show you how the CoSchedule headline analyzer does most of this work for me.

You’ll be able to use the information provided as a step-by-step guide for creating your headlines & blog titles.

If you’re ready to improve your headlines and increase your click-through rate, this post is for you!

Table Of Contents
Why Headlines Are So Important
How To Write Headlines [4 Steps]
1. Start With A Broad Topic
2. Narrow It To A Keyword
3. Observe The Competition
4. Start Writing A Headline
Headline Studio By CoSchedule
Using The Headline Studio Analyzer
Their Website vs Browser Extension
Pricing Structure
Final Thoughts

Why are headlines so important?

Your headline will be the first thing a potential reader sees. If you haven’t written a catchy headline, it’s all they will see.

It’s your first (and only) chance to have them read your article. This is what makes your headline the most important part of your content.

As the famous quote goes:

When you have written your headline, you have spent eighty cents out of your dollar.

If you treat your headline as an afterthought, all the time you spent writing an article is wasted.

Start with your headline.

How To Write Headlines [4 Steps]

I use a simple, 4-Step Process for writing headlines, which has been developed over the many years I’ve been writing.

1. Start With A Broad Topic

This step is simple. Decide on the general topic of your article.

2. Narrow It To A Keyword

Now it’s time to narrow the topic down to something specific, based around your chosen keyword.

Look at the other articles written on your topic. Are they informational, a list post, or tutorial?

Try to find a unique angle of approach that will stand out, but still provide what your potential reader is looking for.

Start with your keyword, and massage it into a basic phrase or sentence based on what you decided in step 3.

At this point, you should create somewhere between 5-25 versions of your headline to get to the right one that works.

But that’s where it falls apart for many people, myself included.

It’s often hard to pick which version is the best one. Which is why I started looking for the best free headline analyzer I could find. Here’s the one I settled on:

I tried this tool a while back, but didn’t really see the value of great headlines vs average headlines. As my blogs began to (slowly) grow, I noticed that my ‘good’ traffic was coming from a massive number of impressions.

When I analyzed my CTR, I was embarrassed. Many posts were below 1% and very few were above 4%.

Clearly people were finding my blog posts, but the headline wasn’t drawing them in.

That’s when I revisited Headline Studio.

While you can start with a Headline Studio free account, if you’re anything like me, you’ll quickly see the value of the Pro account and outgrow the free headline analyzer.

As you can see in the screenshot below, the first iteration of this post’s headline scored a 61. Not very good, but this was my starting point.

The type of headline I’m writing uses the formula:

“Embarrassing CTR? Headline Studio By CoSchedule Will Fix That” (Score 61/100) 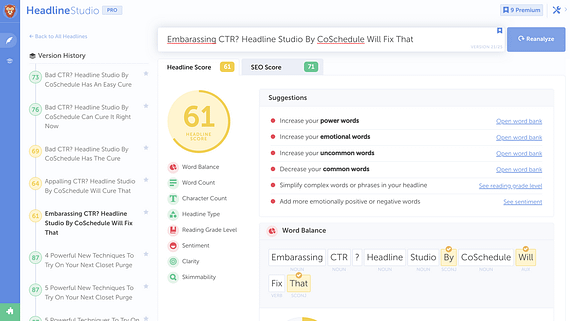 At this point, I went through several more iterations, following the suggestions provided and adding emotional & power words, increasing uncommon words while decreasing common words, and so on.

16 attempts later, I had a much better headline with a score of 83 and no further suggestions from the tool. 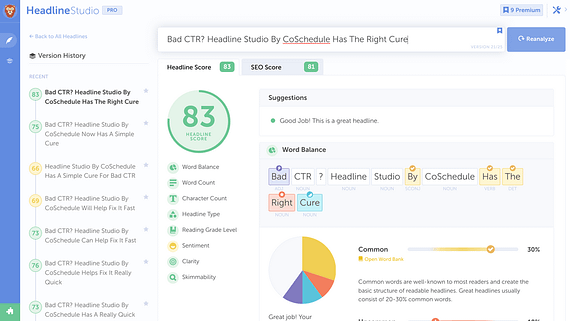 I usually stop making changes  when the headline score reaches somewhere between the low 80s and 90, which usually makes it better than most of the competing headlines.

There is also a headline studio extension (free for Chrome, Firefox and others) that lets you work on your headline inside of WordPress, but I haven’t spent any time with it.

I prefer to work inside of Headline Studio so I don’t have any other distractions.

I went with the Pro Annual account, since you get a bit of a discount paying in full, and the lowest tier provided enough headline credits for my needs.

I’ve had no issue thus far, and can see myself maintaining a membership for years to come.

Often, reviewers are really giving you their initial thoughts on a product and not a true review, where much more time is needed with the product.

That’s why I waited to write this review until I had created 20+ headlines for both new and old content, and got to see the actual results in my analytics.

Roughly 9 out of 10 headlines have seen a significant improvement in CTR, meaning my traffic has increased while the average number of impressions has stayed the same.

About 1 in 10 of these headlines have taken more of a sidestep than a move up or down. I’ll likely spend a bit more time on these few headlines to get a better understanding of where I went wrong.

All in all, using this tool has helped me understand the important factors to consider when writing headlines, and it has been taking me far fewer tries to go from my initial basic headline to a great one.

I can give Headline Studio Pro my full recommendation.

Start by opening a Free Headline Studio Account (which includes a 3 premium headlines), and see for yourself.

Please log in again. The login page will open in a new tab. After logging in you can close it and return to this page.